The winner in our Guilt-free Eats category examining restaurant franchises with a healthy bent, Tropical Smoothie Cafe rose to the top in part because it captures multiple dayparts with a menu of breakfast, lunch, dinner and snack items. The Atlanta-based brand received high marks from our research team for return on investment and a detailed Item 19 that provides a breakdown of revenue by quartile going back to 2017. Average sales increased nearly $90,000 since 2017, to $768,831 for 2019. For the top 50 percent of stores, that average revenue is $982,486.

“The brand provided great resources, marketing, artwork, everything to get guests to come in during that time,” he said, plus it reduced royalty fees for several weeks. “Our sales are back and then some.”

Crouch, who with Glen Johnson formed DYNE Hospitality in 2017 when he had 15 stores and Johnson had 26, said Tropical Smoothie’s made-to-order food and healthy smoothies initially attracted him to the brand, along with its compact size at 1,300 to 2,000 square feet.

“I liked the footprint of the business, that I could grasp the whole business,” he said. “It wasn’t a 5,000-square-foot restaurant where it’s easy for a manager to lose touch.”

Johnson, meanwhile, sought a concept he thought would fare will during a recession, “not a business that would just evaporate when there was a downturn.” Tropical Smoothie has proven itself as that brand, he explained, because it allows consumers to “dine down,” meaning they can still afford to go out to eat without spending a lot. 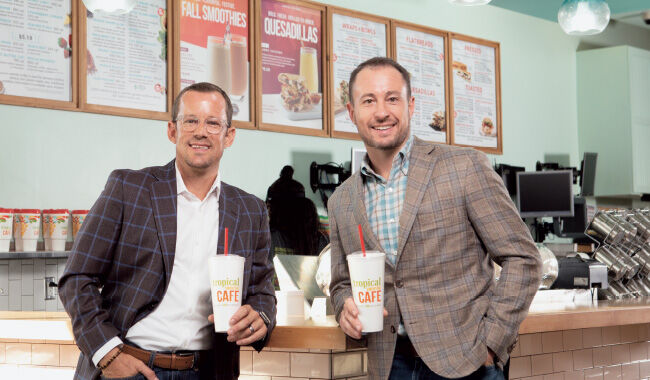